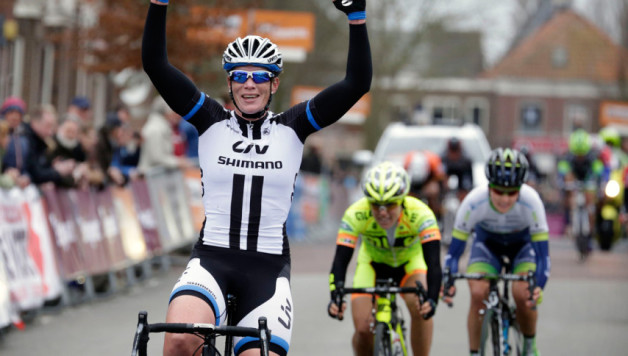 Kirsten Wild has won the Novilon EDR Cup, taking her fifth victory of the season and the Team Giant-Shimano women’s team’s seventh victory. Kirsten took the win from a small group of eight riders that had pulled away from a reduced peloton in the last 10km of the race. She once again put her finishing sprint to good use, adding to her expanding palmares for 2014. “The teamwork was superb today,” said Kirsten after completing podium duties. “The girls helped me out all day, keeping me out of the wind so I could save as much energy as possible. I was still quite fresh in the final and could jump across to the front group. “There was a lot of attacking at the end but I was able to help bring it back together and then finish it off in what was quite a technical sprint. After such great help from the team I’m happy to be able to finish it off for them.” Coach Ruud Verhagen said: “The team were really strong today and Kirsten finished the job off perfectly. All the team except Floortje Mackaij were present in a lead group of about 40 riders who crashed earlier on the cobbles. “They controlled the race, covering the attacks and then with 9km to go Kirsten got into a move of eight and was the fastest at the finish.” A nice way to finish this period of Dutch racing for the team, after going close at yesterday’s World Cup race.