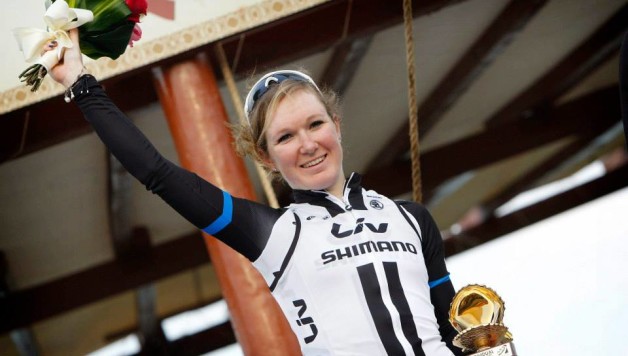 Amy Pieters has won the semi-classic, Dwaars door Vlaanderen beating her three breakaway companions to the line. This is Amy’s third win of the season after her stage victory in Qatar and Omloop Het Nieuwsblad and the Team Giant-Shimano women’s team’s eighth win. Last year it was Kirsten Wild who took the win here and so Amy keeps the win within the team for another year. The race was a short one compared to most, at just short of 80km – seven laps of an 11km circuit. After 30km a group of four riders got away with Julia Soek there for Team Giant-Shimano. Amy then attacked out of the peloton when the gap was around 40 seconds and bridged across on her own, however it took her nearly 15 kilometres to do so, costing a lot of energy. At the end the break had over a minutes advantage and it came down to a sprint with Julia setting the finish up for Amy. “We nailed it as a team today, and I have to thank Julia and the others for being confident in me today,” said Amy after the finish. “I had to fight pretty hard to get across the gap but it meant that Julia could ease up a bit and also that we didn’t need to chase at all behind, leaving Kirsten Wild (NED) to save her energy behind. “I was in time trial mode going across, and having such a smooth ride as the Envie Liv bike really helps at times like this. Once across we were confident as we had the numbers and Julia set me up to take the sprint. “I worked hard over the winter with the trainers and coaches to improve my sprint and general power and this is really paying off this season.” Coach, Dirk Reuling said after the race: “The team did a great job today and Amy was really strong to get across to the break on her own then still have enough to win. “The plan was to get Amy and Julia to go with the attacks and then to ride for Kirsten if things came back together for a sprint. Julia got in the early move and then Amy jumped across on her own but had to use a lot of energy to get across. “She did a really good job and then at the end Julia set her up well for the sprint. Behind, Kirsten won the bunch sprint completing a good day out for the team.”